Home » Lucretius and the papal secretary 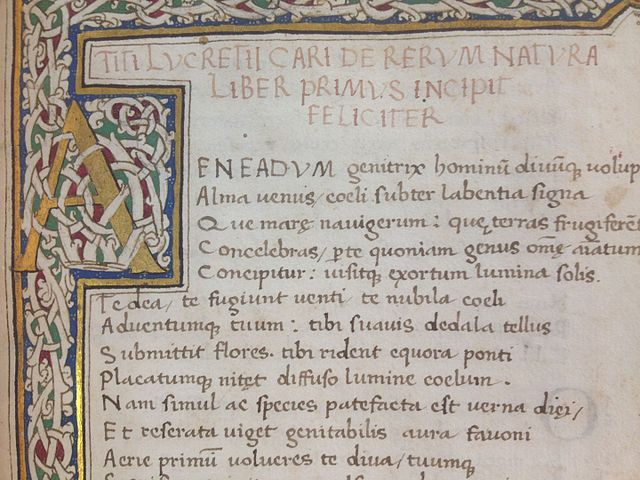 Lucretius and the papal secretary

In 1417, during the Council of Constance that reunited the Catholic Church in the west, a papal secretary took advantage of the location in Germany to visit some libraries, while the papacy was vacant. He was hunting manuscripts, but not the newly written ones. Instead Gian Francesco Poggio was seeking ancient manuscripts. A humanist inspired by Petrarch, Poggio sought classical Latin scripts. Among many others, he found one in particular; a ninth century Carolingian copy of De Rerum Natura (On the nature of things) by Titus Lucretius Carus, the only widely known copy at the time.

Lucretius’ long six-volume poem was at once heretical and revolutionary. Poggio knew of Epicurus, the Greek philosopher Lucretius followed, but little was known about his work directly. Instead, he was ridiculed and dismissed as a glutton and atheist by his enemies. Indeed, Epicurus’ name even became the Hebrew word for atheist. Poggio sent this manuscript to a friend who copied it and circulated it, though he lost Poggio’s discovered copy.

Lucretius’ poem discussed the nature of the physical world, and this included atomism (the idea that everything is made up of very small objects ), the creative role of chance events, leading deterministically to humans and animals and plants, and the complete lack of interest by the gods in anything that might happen in the physical world (hence the charge of atheism; Epicurean philosophy did not worship or seek to influence the gods).

Although clearly dangerous, a code of disavowal in forewords and use of Lucretius developed so that he could be emulated, inspire paintings, and philosophised about without finding oneself tied to a pyre. His ideas then influenced many early modern thinkers and naturalists as modern science started up. Moreover, his distant gods allowed a space for deism and other unorthodox ideas to take root in the west. One might say that without Lucretius’ influence, neither the Enlightenment, nor modern science, would have been possible at the times they happened.

It turns out that other libraries had copies of De Rerum Natura, and the ideas he espoused had not exactly been forgotten, but they had been suppressed. The flourishing of his sceptical philosophy led more or less directly to modern scepticism, the possibility of public atheism, and mechanical science. In some ways he is the forerunner to modernism. Had the Catholic Church not been riven by schism at the time, and seeking to reconcile its communion, we might not have the world of science, scepticism and irreligion of today.

Alison Brown. “Lucretius and the Epicureans in the Social and Political Context of Renaissance Florence.” I Tatti Studies in the Italian Renaissance 9 (2001): 11. https://doi.org/10/dvt84c.

The Stanford Encyclopedia of Philosophy entry on Lucretius.

The Internet Encyclopedia of Philosophy entry on Lucretius.

A review of Stephen Greenblatt’s The Swerve in the Guardian.

A review of The Swerve in Harvard’s magazine.