Home » Is physicalism an impoverished metaphysics?

Is physicalism an impoverished metaphysics?

Every so often, we read about some philosopher or other form of public intellectual who makes the claim that a physicalist ontology – a world view in which only things that can be described in terms of physics are said to exist – is impoverished. That is, there are things whereof science cannot know, &c. A recent example is that made by Thomas Nagel [nicely eviscerated here by the physicist Sean Carroll], whose fame in philosophy rests with an influential 1974 paper that there is something like being a bat that no amount of physics, physiology or other objective science could account for.

Recent, Nagel has argued that the evolutionary view called (historically misleadingly) neo-Darwinism, is “almost certainly” false. One of the reasons is that “materialism” (which Nagel should know is an antiquated world view replaced by physicalism defined above; there are many non-material things in physics, not least fields of various kinds) does not permit a full account of consciousness; the subjective facts of being a particular individual organism. Another is that the chance that life would emerge from a lifeless universe is staggeringly unlikely. How this is calculated is somewhat mysterious, given that at best we only have (dare I say it?) subjective estimates anyway, but there it is.

But Nagel is not alone. Various nonreligious (apparently) thinkers have made similar assertions, although some, like Frank Jackson, who proposed the Knowledge Argument, have since backed down. What is it that physicalism must account for that these disputants and objectors say it cannot?

It almost entirely consists of consciousness, intentions, intelligence or some similar mental property which is entirely inexplicable by “reductionist” physicalism. [Reductionism is a term of abuse that means – so far as I can tell – solely that the person who makes such an accusation does not like the thing or persons being accused.] And that raises our question: is physicalism lacking something?

What I have been waiting for since I tricked independently upon a physicalist view aged 16 or so, is a reason to think that this is the case. What was once defined as irreducible (to physics), such as the fluidity or water or the ability to make abstract maps of the world and then to navigate it with some success, have been shown merely to be a matter of computational tractability, not logical or metaphysical impossibility.

Consciousness in particular strikes me as a ghostly strawperson. When one is asked to define consciousness, if it is done functionally, then we can understand that there are purely physical systems (including computers of some kind) that can replicate these functions. If it is done in terms of the subjective experience, then as I have argued before, even a digital camera has some degree of subjectivity. But if it is done in terms of ineffable experience, one has to ask why something that cannot be expressed clearly can act as a counterexample to states of affairs that can be expressed clearly and precisely.

The ineffable states of consciousness, the qualia as they are called, strike me as a mistake of language. Once, Ludwig Wittgenstein noted that “Philosophy is a battle against the bewitchment of our intelligence by means of our language.” (§ 109, Philosophical Investigations). Merely because we have such terms as “seems”, “feels” and phrases like “What-it-is-like” is no reason for us to conclude that there are seemings, (irreducible) feelings and qualia; to think so is to confuse verbs for nouns, or functional terms for ontologies. That we are conscious (that is, that we do things in a conscious fashion) is beyond reasonable doubt. That conscious behaviour implies Consciousness (the substance or ontologically irreducible state) is beyond credulity. We are being bewitched by our language. 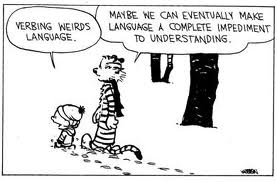 One major consequence of taking our verbing language as nounish is that we then tend to privilege our consciousness as the primary state of the world. I don’t mean panpsychism, although that seems to me a prime example of this mistake, but the idea that the world we experience is a mere construct of our [language | mind | worldview | etc.], as if we make the world in which we live. This mistake is rife in post-Idealist philosophy, and is perhaps an error assigned to the early empiricists, who asserted that all we know and experience is the evidence of our senses, making our senses primary to the world being sensed. This is akin to making the letter primary to the letter-writer, and even the postman. It appears in the claim that if two people have very different worldviews they literally live in different worlds (a view ascribed with varying justice to Thomas Kuhn, Immanuel Kant, and even Wittgenstein himself).

Where two principles really do meet which cannot be reconciled with one another, then each man declares the other a fool and a heretic. [On Certainty, §611]

Kuhn’s idea of paradigm includes this mistake, and generations of philosophers have repeated it, as if all that two different scientists who hold theories that are not reconcilable held in common was that they had theories, and not (as Wittgenstein noted) a form of human life, a shared culture and the rest. But anyway, back to physicalism.

One of the main criticisms of physicalism is that it leaves unspecified which physics is taken to be all there is. This depends upon the assumption, often repeated by philosophers, that what there is can best be derived from a formalisation of some theory in a domain, and as physics covers all domains, it must have all the objects. I do not think this. For a start, an ideal and final physics is very unlikely to be developed any time soon; each time we have declared that we now have the standard model of this or that we find things that undercut or extend our conceptions (dark matter, dark energy, etc.). But deeper than this, I think that no matter what we finally conceptualise the world to be, it is likely not to be the only formal theory that can do this.

Again, we verb our nounings.  If we have a descriptive model of the universe in some representation, it may be that we have cut nature at the joints that interest us, but that some other beings might find unintuitive and maybe even incomprehensible. So I cannot think that I must assume that what exists in the world are all and only the objects that have classifications in some theory, no matter how accurate, precise and universal that theory might be.

Instead, though I think that whatever does exist will be describable in a physics if we can only investigate it. For instance, were it the case that qualia existed, then I would expect them to have some physical, causal effect on other objects, in ways that were regular and manipulable. If there is no causal effect, then I cannot think that class of things is real. Any kind of coincidental parallelism between qualia and brain states, for example, strikes me as a scientific, not to mention a metaphysical, miracle, and miracles are the enemy of understanding. So I don’t exclude qualia because they are not physical, but because if they are physical, they are mysterious and miraculous and uncausal.