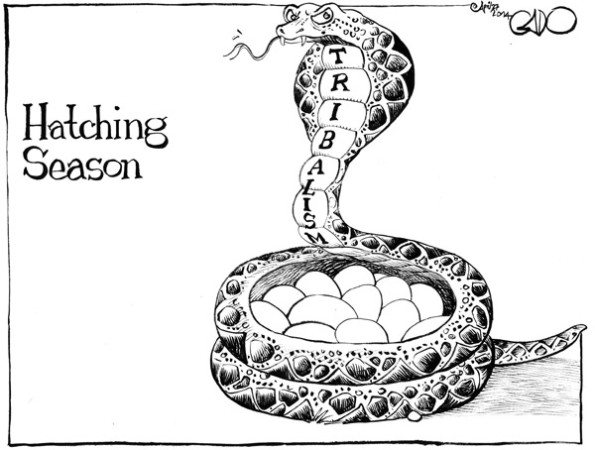 Humans evolved in tribes, our species’ equivalent of the general primate troop structure. This meant that members of the tribe benefited from shared resources, the protection of the group and the inherited knowledge of the tribe. It also meant that we will natively and naively defend our group against others, and demonise the other groups. You see it in sports, culture, nations and religions. You see it in class, gender wars (there’s a reason men tend to denigrate and discriminate against women and intersex) and age cohorts. And recently, Australia has been showing it in spades: beginning with the racist dog whistles of government policy towards refugees over the past decade (yes, Labor, I’m including your execrable craven cowardice too!). And right now that tribalism is being used to take away legal rights that Australians have enjoyed for over 60 years. We are giving up rights like the presumption of innocence, public accountability of government, and general human rights.

I also see tribalism in the attacks by the antireligious on all religious believers (in fact much of the tribalism of the skeptical community stems from attacks upon Islamic belief, just as the current rash of state sponsored racism does). The irony here is that the reason the West hates Islam is because it used to be a competition between Christendom and the Caliphates for control over territory; and now it is the competition for control of oil resources. That irony is lost on the supposedly progressive skeptics movement, almost all of the time.

The fact is, it is not progressive humanistic thinking to replace one set of tribalisms with another set; that’s just hypocrisy and self-serving behaviour. We can get that at the local store – why do we need to be skeptics to do that? Why do we need to promote sexism or anti-non-Western attitudes in what should be a rational movement?

I want to say that rationality leads away from these tribalisms, but in fact rationality is, as old David H said, a slave to the passions, and sometimes (most of the time?) those passions are self-interested in the extreme. Sure, there were the cosmopolitan rational thinkers like Russell, or Tom Huxley, but they would not even get a decent twitter following these days. You gots to hate if you wants the fans.

I’m sick of it. No more labels for me: there are people and their actions. If they act well, I don’t give a flying fornication what their label is. And if they don’t, I don’t care they are supposed to be my peeps. I’m an anti-semic from now on.