Home » Genes – the language of God 1: Genes as Language

Genes – the language of God 1: Genes as Language 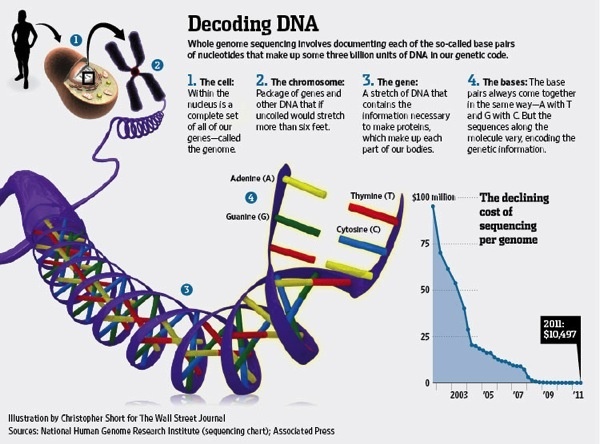 A common way to talk about genes is as things that have meaning, either as a kind of language (or code, or recipe), or as information about the bodies of the organisms they generate. This has led some, for example, Francis Collins (2010), to speak of genes as the language of the living universe, in much the same way that some physicists talk about the mathematical laws of physics as the language of the physical universe. In this series, I will discuss this way of talking about genes, and consider (1) if it is true or helpful, and (2) what problems arise from thinking about genes as language. Towards the end, Stephen Ames will discuss what this means for thinking about God and genes, responding to Collins’ 2006 book The language of God. As I am not a believer, I cannot say anything helpful to believers about this topic.

Let us look at some examples of genes-as-language talk.

In 1966, George Beadle entitled a book on genetics – then still new to most readers – The Language of Life. It was a metaphor of course, and he did not employ it much in the textbook, but the idea that genes are something language like is very old. The historian of science, Donald Forsdyke, has traced similar ideas back to Darwin’s contemporary, Samuel Butler.

Because we are most familiar with language, describing and explaining things in terms of language and language-like features has real power to convey ideas about science. However, since these things science describes are not actually language, there is a risk that it will cause confusion, and it does.

Collins’ use of this terminology is wildly overblown. For example, he writes, in a chapter he titled “Deciphering God’s Instruction Book”, “I found myself standing next to the President of the United States in the East Room of the White House on June 26, 2000, announcing that the first draft of the human instruction book had been determined. The language of God was revealed.” [2006, 122] Later, he writes “For me as a believer, the uncovering of the human genome held additional significance. This book was written in the DNA language by which God spoke life into being.” [2006, 123]

If these are metaphors, they might be harmless. A metaphor is a figure of speech, in which what we know of one thing can be carried over to another (the Greek word metaphoros today means a shopping trolley!), and the use of metaphors in learning and teaching is unavoidable. But a metaphor is at best the first step up to knowledge. Once you take that step, then you have to understand the new item in its own terms. Here are some other language and informational metaphors regarding genes:

A metaphor can systematically mislead us. It can mislead members of the general population who think that the Higgs boson really is the “god particle” or that the Big Bang really was an explosion. This might be unavoidable if we don’t teach the facts early enough; and it may be harmless. But consider some other metaphors: we “stimulate” the immune system with this or that drug or vitamin. This dysmetaphor, so to speak, causes people to spend literally billions of dollars on useless vitamin supplements or to avoid vaccination so their kids are “stimulated” by actually contracting measles, which can kill.

These dysmetaphors can have more subtle effects. Some, such as George Lakoff, argue that the metaphors by which we frame issues subtly changes how we process the issues. While it may not be that framing effects really sharply change our thinking, nevertheless, even scientists can be misled by metaphors. I would say that the idea genes are linguistic things – symbols – misleads a great many scientists in a great many ways. It moves our attention from the physical properties of genes and their organisms to abstract properties. We will return to this. And of course there is the misleading such metaphors cause when philosophers take them up.

Published in Genetics, Philosophy and Science