From Buffon we see that geographical factors are what caused novel forms for eighteenth century naturalists. Buffon’s view is a degenerative view of transformism. “Species” for him are degenerate forms of the premiere souche or first stock. The varieties we see around us are caused by local adaptation, through processes that are direct: temperature and climate, soils and flora, all directly cause animals to adapt to them in ways that are unclear.

The other, much older, view of novel forms is that they are caused by hybridisation. This view goes back at least to Aristotle’s History [Investigation] of Animals:

As a general rule, wild animals are at their wildest in Asia, their boldest in Europe and most diverse in form in Libya [Africa]; in fact, there is an old saying. ‘Always something fresh in Libya.’ It would appear that in that country animals of diverse species [1] meet, on account of the rainless climate, at the watering places, and they pair together; and that such pairs breed if they be nearly of the same size and have periods of gestation of the same length. For they are tamed down in their behaviour towards each other by extremity of thirst. … Elsewhere also offspring are born to heterogeneous pairs; thus in Cyrene the wolf and the bitch will couple and breed; and the Laconian hound is a cross between the fox and the dog. They say that the Indian dog is a cross between the tiger and the bitch, not the first cross, but a cross in the third generation; for they say that the first cross is a savage creature. They take the bitch to a lonely spot and tie her up – and many are eaten, unless the beast is eager to mate. [History of Animals VIII.28 606b16–607a7]

Buffon, however, believed that hybridisation would cause a partial or complete regression to the first stock. Into this atmosphere came Erasmus Darwin and Lamarck, both of whom made evolutionary theories the subject of scientific discussion, unlike Maupertuis.

[I’m waiting for a slew of books on Erasmus to arrive before I write this. In the meantime, have fun with Lamarck]

Lamarck held that only individuals (organisms, or as they were called at the time, organised beings) existed in nature, and he wrote (Lamarck 1914: 21, orig. 1809)

We may, therefore, rest assured that among her productions nature has not really formed either classes, orders, families, genera or constant species, but only individuals who succeed one another and resemble those from which they sprung. Now these individuals belong to infinitely diversified races, which blend together every variety of form and degree of organisation; and this is maintained by each without variation, so long as no cause of change acts upon them.

Species, therefore, were abstractions that existed in the minds of observers. Lamarck therefore had a deflationary or “nominalistic”* view of species and could not give an account of how new “species” came to be. However, he did think that there were new species through transformism. This is a conundrum that can easily be resolved when you see how he did it.

Lamarck was not a transformist before around 1800. He was a well-respected, if somewhat outsider, naturalist who had done much work on plants before he turned his attention to invertebrates (a term he coined) at the Jardin des Plantes, where he was superintendent after Buffon (whose children he had tutored). He was a friend of the famous family of botanists, the de Jussieus, and Antoine Laurent de Jussieu was his child’s godfather. Strongly influenced by the idea of a “chain of beings” (Charles Bonnet’s notion) he saw animals arranged on a scale of simple to complex, but not in the way Bonnet had, for his view was not static. Each “species” arose from a “monad” (a term made famous by Leibniz in his Monadology) by spontaneous generation out of nonliving matter, due to chemical and physical processes as yet unknown but investigable by those sciences.

Accordingly, each monad formed a chain of individuals each striving to make a living. This striving was caused by individual adaptation to local conditions, which were then passed on to progeny. This process led to an increase in complexity and adaptation. Lamarck is best remembered for his theory of inheritance, at a time when this was the received wisdom of the day. Every farmer or animal breeder was of the view that what happened to the adult organisms affected the progeny, ranging from the idea that the maternal experience would affect the fetus (such as a shock or experience of what they saw).

Lamarck’s theory was more refined and elaborate, however. He restricted it to what came to be known as “use and disuse”, an idea Charles Darwin also accepted. What was used, like muscles, would be stronger in the child, and what was unused would wither away. But Lamarck also held that what the animal strove for, what is needed, would also affect the progeny of that animal. Thus his famous giraffe example. The giraffe’s neck was so long because generations of giraffe forebears had stretched their necks to reach higher and higher leaves on trees. It is not a coincidence that Lamarck’s colleague Geoffroy led a procession of Zarafa, a giraffe gifted by Mehet Ali Pasha, the Viceroy of Egypt, to France, from Marseille to Paris in 1827: it was an exotic animal few Europeans had seen, and was a cultural icon.

Lamarck’s account relied upon “need” being the driver of evolution. The French word besoin, which he used, translates into English as “want”, with the same ambiguity (Packard 1901). Something can be a want, meaning it is lacking and therefore striven for, or it can be what an agent wants. It was the latter sense that Lyell, in the second volume of his Principles of Geology, which introduced Lamarck’s ideas (albeit through criticism) to English speakers, translated the term. But Lamarck was a physicalist: for him besoin meant that there was a lack of something that organisms strove to acquire (like food) and this modified their physiology (which was observable in many cases) and that physiology was then inherited.

This, together with the physical impetus towards complexity, caused the species we see today. Each species was in fact a lineage of individuals, each slightly different from their parents, filling up ecological niches in different geographical conditions, and thus no division into “species” was natural, only artificial or conventional. Moreover, lineages would tend to follow much the same path in their evolution. Unlike Bonnet, though, he did recognise that not all species followed the extant same pathways from simple to complex. Because of geographical conditions, some would become flyers, some sea or water dwellers, and so on, and so he produced his famous “tree diagram” [Zoological Philosophy (ZP), 1914, p179, French version 1809, v2, p424]: 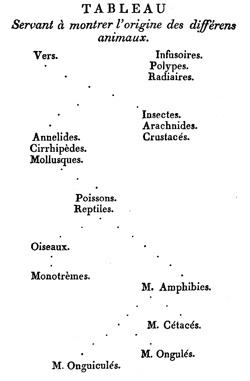 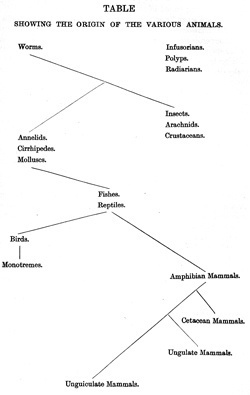 This diagram has often been misread as a phylogenetic tree, but it is not. Instead it is more like a roadmap, in which a lineage may take one of the pathways from simple (top) to complex (bottom). Each lineage begins its existence as a “monad” (the simplest form of life, which arises spontaneously) and thereafter never mixes or splits. Lamarck has no phylogeny. He writes [ZP p126]:

Nature has produced all the species of animals in succession, beginning with the most imperfect or simplest, and ending her work with the most perfect, so as to create a gradually increasing complexity in their organisation; these animals have spread at large throughout all the habitable regions of the globe, and every species has derived from its environment the habits that we find in it and the structural modifications which observation shows us.

Lamarck’s theory of the acquisition of characters by adults being passed on to progeny is like the modern notion of the inheritance of epigenetic markers in some ways, but unlike Lamarck’s “marks”, epigenetic influences are not generally long lasting beyond the fourth generation, and they modulate the expression of genes in any case. Lamark’s theory was not stupid. It was, in fact, played out at the end of the [older] epigenesis/preformationist debate. According to preformationists, each fetus was present in the parent, and the parent’s parents, etc, back to the creation, and all it did was grow from that homunculus. Epigeneticists thought that the fetus was constructed from maternal materielle by a vital impulse or under the influence of the father’s sperm. Biparental inheritance was limited to maternal effects upon the growing fetus. Lamarck simply formulated two rules of this kind of inheritance and developmental debate [ZP p113, English edition]:

FIRST LAW
In every animal which has not passed the limit of its development, a more frequent and continuous use of any organ gradually strengthens, develops and enlarges that organ, and gives it a power proportional to the length of time it has been so used; while the permanent disuse of any organ imperceptibly weakens and deteriorates it, and progressively diminishes its functional capacity, until it finally disappears.
SECOND LAW
All the acquisitions or losses wrought by nature on individuals, through the influence of the environment in which their race has long been placed, and hence through the influence of the predominant use or permanent disuse of any organ; all these are preserved by reproduction to the new individuals which arise, provided that the acquired modifications are common to both sexes, or at least to the individuals which produce the young.

The first law is sometimes called “Use and Disuse”, and a version of it was advocated by Charles Darwin. The second law is “the inheritance of acquired characters”, and is Lamarck’s explanation for novelty. It is a reworking of the Buffonian view (also held in the medieval period) that geography directly modifies the traits of organisms. We will revisit this in the 1860s.

In sum, Lamarck not only has no phylogeny, he has no speciation. According to him, only individual organisms and their individual adaptations exist, and species are a mere abstraction in our minds.

1. Aristotle does not use the term eidos here, but instead homophule, which means “same family”.

Lamarck, Jean Baptiste. 1914. Zoological philosophy: an exposition with regard to the natural history of animals. Translated by Hugh Elliot. London: Macmillan.