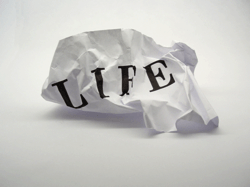 Life, I believe, is what physics does on one particular planet on a Wednesday. More exactly, it is a series of chemical and physical dynamics that occurs between 3.85 billion years ago and now on this planet.

Ferris Jabr, an editor at the Scientific American site, has a piece entitled “Why Life Does Not Really Exist”, and in it he challenges the NASA definition of life as any system that is capable of undergoing a Darwinian process. He relies upon the work of Carol Cleland, who worked with the NASA Astrobiology program before it was shut down. He and Cleland deny that there is anything that applies to all and only those processes we call “life”. This, he thinks, sinks the Astrobiology project that seeks to find life elsewhere in the universe, because they lack any clear criteria of what they are looking for.

Now I have dealt with the definitions of life before here: The Meaning of “Life”, “What is ‘Life” Again?” and “What is ‘Life’ At Last?”. In it I made a point that the meaning of words like “life” tend to be prototypical. You pick something that is unquestionably alive, point to it, and say “life” is like that thing there. This is both an ostensive definition (you anchor it to the pointed thing) and an extensive definition (you list the things it applies to, in this case through some sort of resemblance or similarity metric). What it is not, though, is a theoretical definition. Scientists seem to like seeking theoretical definitions of key terms. They go to great lengths and have long discussions about what the “true” definition is of terms that are general, useful, and yet elusive. There are several ways to go. One is to take some privileged theory and say that term X refers to all objects that play this role in the theory. This inevitably requires excluding some things that were included in the posse use of the term X. For example, when we discovered DNA, life was held to be that which has DNA, until we realised that some objects (some viruses) use DNA and are not alive by most understandings, and that there are things which do not use DNA, but use RNA. The prior scope of the term “life” overrode these theoretical definitions, although the battle was bloody and many careers died during it.

Another way to go is to seek a “general theory” of the term X, which means taking disparate properties and attempting to come up with a global model in which these things all have theoretical roles. The trouble with this approach is that the more you include, the more abstract the theory, like the Darwinian account. If life is what evolves, and chemical and computer programs can evolve, then you end up explaining almost everything at the tradeoff of having very little to say about the actual things. What makes a virus fitter than another is its physical ability to infect host cells and engage the cell’s reproductive machinery, not the having of a fitness of 0.7. Such theories, including systems theory, chaos theory, complexity theory and the latest of these trendy approaches, network theory, tend to be ways to anticipate what will happen, yes, but only after you have given the model a physical interpretation: mapping (for example) genes to replicators or cell surface molecules to fitness challenges. In effect these models tell you about a class of things the model tells you about.

So trying to come up with a theoretical definition of such terms (and the one I know most intimately, is, of course “species”) is in general a losing bet. We might recast this definitional question thus: “Is ‘life’ a natural kind?” This is what it implies: that in order for there to be meaning, scientific meaning, to the term “life”, it must be a kind of things in nature that are objective and so mandated by a best theory (if and when we get one). Anything else is subjective or “folk science” and should be abandoned. To some, by which of course I mean me, this is too harsh and thin a conception of scientific meaning. If Cleland is right, then there is no science of biology, never mind astrobiology.

David Hull once said that the only law in biology (and hence the only natural kinds we will find) is that all laws in biology admit of exceptions. Including, it appears, that one. Hull’s law is tied into a debate about kinds in science, and if there are no exception less laws in biology, we might be forced to say that the science, and hence the funding and credit given to biologists, is to be abandoned. At the very least this will cause ructions in university management. And yet, this is the century of biological science. How can we reconcile these conflicting issues? I believe it has to do with the role of phenomena, not theory.

Science does not enter into an enquiry fully armed with theoretical categories. Any new science (and biology was a new science 300 years ago) must begin by noticing something interesting. Usually, this is something that is interesting in the wider, nonscientific, culture. “Planets” were once wandering stars. Now they are largish balls of matter that orbit a “star” (now thought not to be a point of light on crystal spheres, but a very large ball of fusioning gas). In the process of noticing and then explaining these objects, once just folk objects, we have come to a rich understanding of things even if there are “failed stars”, and “dead stars” that were never once part of the popular cultural imagination.

Few phenomena in our world attract our attention as much as living phenomena. The reason for that is pretty obvious: if we didn’t attend to them well enough, we’d be dead. From that folk conception of animate and edible growing things, we developed our present taxonomies and explanations, but as we did so the comfortable certainties of life, many taken from Aristotle, have evaporated or been constricted to a small class of things. This is progress. Where once a biologist might have thought that what applies to E. coli applies to an elephant, we now know this is not true. They have, for a start, different ways of “reading” the genetic code. But nobody would then say an elephant is alive and an E. coli is not. “Life” is a polymorphic property. We have many things we think are alive although they do not share the same properties, at least at a physical level.

So “life” is not a natural kind, if by that we mean it is not whatever can be slotted into a placeholder in a grand theory. But it is real. Elephants, and E. coli and viruses and fungi, and so on all exist, and they are something we attend to because of their importance in, well, life. We have borderline cases like viruses and memes, and how we classify them will depend a lot on what we are doing, but still we must investigate these organisms and objects as they are. Life is a phenomenon.

One of the claims often made is that our theories tell us what the phenomena are. In my book with Malte Ebach, The Nature of Classification, just published, I argue that this is not always true. Some phenomena are handed to us “ready made” as it were, and they set up an explicandum, that which is to be explained and understood by our science. The theoretical explanations are those which we construct to explain these phenomena, and in the process we trim, expand and revise our understanding of what is alive. Once upon a time, the growth of crystals was seen as alive. Now we do not, because we have an account of their growth that is not at all alike the growth of living things with metabolisms. Our theories have revised the phenomena. But many phenomena are resistant to such evaporation or dissipation of the explicanda. Life, I submit, is one of those. It is real, and not to be abandoned because we cannot define it, just as mountains are real although we have no theoretical category for them in plate tectonics. So I think we can say life exists. And if you reject this, I can point to some living things and refute you thus.