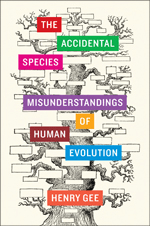 I have three rules in life. One is, Never get into a land war in Asia. The second is, Locate the nearest exit. The third and most important is: When Henry Gee writes something, believe it. I first encountered Henry through his book In Search of Deep Time, which covered a field of science that I was researching as a PhD student. In that book he took to task some of the comfortable assumptions of palaeontologists and taxonomists about the history of evolution (and got quote mined by creationists ever since), and he was right to do so. In this book, his target is the same but writ larger: the assumption of there being a narrative in evolution, and specifically in human evolution.

Henry (I use his first name because we have interacted on Twitter, which makes him a close personal friend) is an editor at the journal Nature, and also something of a raconteur. He writes very well, and in a personable style with the occasional flash of wry humour (ticking one of my boxes right out). But the topic and treatment is anything but the usual sort of pap we expect in “popular science”. Instead this book is informed, subtle and most of all right (that is, I agree with the things he says, ticking another box). Evolution is not a story of progress and the inevitable development of unique human traits. It is a piecemeal history where we have snapshots of the past that we strive to make sense of. Henry is, in effect, repeating the comments of Claude Bernard: rest easy on the pillow of ignorance. What we don’t know we don’t know, and we shouldn’t confabulate to serve our tendency to make neat Hollywood scripts.

The book covers first the issue of fossils and what they really indicate. Then he discusses the narratives of human evolution, including the rise of big brains, upright stance, tool making and hypotheses about where and when humanity evolved. He is, of course, not denying that these things evolved or occurred, but only that in the end we do not know how they did, and moreover we are unlikely to ever have firm evidence that resolves the matter.

He spends some time deflating human uniqueness, which my regular readers know I have also spent a bit of time doing. He discusses language, consciousness, and intelligence in human and nonhuman species in a subtle fashion that most philosophers would find hard to achieve, but never loses his readers. He explains evolution, and most importantly how natural selection is not the same thing as evolution, and the nature of sexual selection, often ignored by philosophers and the popsci commentariat. He notes that evolution is as much about the loss of traits and taxa as it is about the acquisition of them, and that there is no such thing as a linear history in life or society.

Henry’s special heresies have led some, such as Jerry Coyne, to call his work “anti-science”. I expect that this book will garner the same reactions. But it really isn’t. Instead it is a call for science to not claim more than it justifiably can. The evolution of science itself has been away from human-centric perspectives to an understanding of the natural world, and that means not claiming to know what we do not know. It especially means that we should avoid trying to use our lack of knowledge and speculations as the foundation for inferences about the way things are. I fully recommend this book to anyone who has an interest in the evolution of human beings and what we actually do know. It is an excellent vaccine against the pull of the narrative in science and society. Buy it now.