Recently the Jonah Lehrer scandal was raised again when he was paid $20,000 to speak on his journalistic dishonesty by the Knight Foundation. I cynically noted on Twitter that being honest and as accurate as I could be netted me exactly nothing in the way of honoraria (I think I got a bottle of scotch once, for which I was very grateful). The best discussion of the Lehrer affair is this one by Christopher Chabris, professor of psychology at Union College, in which he notes

When the allegations of plagiarism and fabrication came out, the story became one of “greatest science writer of his generation makes unthinkable mistakes,” and the analysis was mostly psychoanalysis of Lehrer’s motives or of the media culture. Entirely lost was the fact that Jonah Lehrer was never a very good science writer. He seemed not to fully understand the science he was trying to explain; his explanations were inaccurate, overblown, and often just plain wrong, usually in the direction of giving his readers counterintuitive thrills and challenging their settled beliefs. 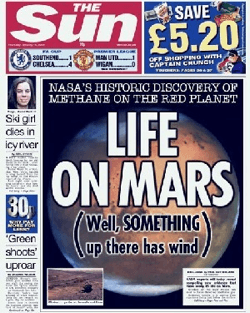 Entirely lost in such criticisms, though, is that this is not only a failure of the entire field of science reporting, whether on blogs or in published outlets (or both), but of the very field and profession of journalism itself. What you read in the successful mass media is not factual, nor complete, but a story, a narrative. And narratives have to have conflict. They need to have drama, or they will not be published, and if they are, they will not be read.

This is why the “view from nowhere” so criticised by Jay Rosen developed. If you simply report the facts, people’s attention will wander and you will not sell advertising. So if there is no drama, create some. Find an “opposing” view to report, even if it means giving equal weight to the ignorant, the foolish or the simply insane, and if you can’t find a credible enough counteridiot, interview another journalist. Every time a journalist interviews a journalist, you are being offered theatre, not reportage.

There are a few, a precious few, science journalists who rise above this dramatic license, but even they are constrained by the medium. And let us understand the nature of the medium. Mass media are not, contrary to myth, designed to pass on information. They are designed to modify attitudes. This is because they must sell advertising, or, if they are publicly funded, they must compete for audience share with the media that are not so funded, and you don’t get audience share by deliver facts. You get it by engaging the audience. Humans are narrative driven, so facts take at best second place to a story. 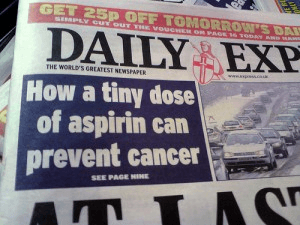 The media have at most about a dozen narrative frames. In the field of science, these include The Breakthrough, The Imminent Danger, The Founder, and The Fraudster. Each of these is dramatic, and engaging, and lead to fear or the release of fear (which has usually been constructed in the first instance by previous frames). But anyone who actually works in the field of science, or more generally in an academic or professional field, knows that most of what is reported, even if it is accurate, is the ephemera or epiphenomena of science. The work that scientists actually do is much less dramatic, but by the same token it is far more important than the drama. To understand it takes effort, and to understand the importance of it takes analysis and care, and avoids the view from nowhere. And it is almost never reported. It is not dramatic enough. 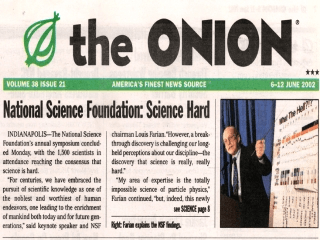 For this reason, when you actually study a field, there is little to no narrative. Of course the sciences themselves are not free of narrativity; every textbook tells a story (usually wrong or misleading) that purports to tell students how we got to the point the textbook relates. Historians then spend a lot of time trying to uncover the actual sequence and developments. Popular histories, though, are just another form of journalism, even if they are written by a Bill Bryson or a Dava Sobel, and they often mislead as to facts. This is unsurprising; they are there to tell you stories.

The field of science communication attempts to remedy these lacks by emphasising the need for accuracy and objectivity, but if the very domain in which science communication takes place is corrupt, and I regard it and all journalism as corrupt from its inception, this is papering over the cracks. Science communication is not the solution to the problem of the public misunderstanding of science. Education is. Scientists are not, and should not be, journalists, nor even historians (unless they turn to history of science as a profession, in which case they can often, with some training, be very good at it). They should do science, and the task of communicating their results to the lay public should be handed to those who can really get an understanding out of those willing to make the effort: teachers. Training scientists to be science communicators, as some insist we should do, merely makes them less active scientists, and they will remain unable to communicate science unless they, too, fall into the drama trap and modify attitudes. Facts are not dramatic. All the actual drama is in how people respond to facts, and that is no longer science, nor even science policy, but simple politics.

This has a number of implications. The most obvious is that we should not expect journalism nor popular publishing to do much to actually educate the lay public. The reason why textbooks and monographs are dry is that they do attempt to cover facts, and the different (actual) ideas and approaches, in order to initiate a critical analysis in the reader. You don’t do this with a breathless Dan Brown style of writing. So if we want a better informed populace, and it is vital that we have one, there is only one way to do it: teach the science to students in a non-partisan fashion, and stop making up drama, which is to say, conflict, where there is none. Evolution is not controversial in science, nor global warming, tobacco causing cancer, and the overuse of pesticides and fertilisers causing massive ecological damage. These are facts in any sense of the word, philosophical debates about factitude notwithstanding. All else is obfuscation for political drama.

Governments should therefore take all educational decisions out of the hands of politicians and pundits. That there should be a public debate is not at issue: this can go on and should do in the public sphere. But unless and until the scientific community is convinced that the objections raised in public are correct, scientifically rather than politically, no amount of noise in the media should have the slightest effect on what is taught.

Mark Twain, to whom all good bons mot not otherwise ascribed to Churchill or Wilde are ascribed, once said (it is claimed):

It seems to me that just in the ratio that our newspapers increase, our morals decay. The more newspapers the worse morals. Where we have one newspaper that does good, I think we have fifty that do harm. We ought to look upon the establishment of a newspaper of the average pattern in a virtuous village as a calamity.
– “License of the Press,” speech, 31 March 1873

I have said before that I think the greatest disaster for modern society was the invention of public relations and marketing. I include the invention of that particular PR called journalism. As Twain also rightly noted:

It has become a sarcastic proverb that a thing must be true if you saw it in a newspaper. That is the opinion intelligent people have of that lying vehicle in a nutshell. But the trouble is that the stupid people — who constitute the grand overwhelming majority of this and all other nations — do believe and are moulded and convinced by what they get out of a newspaper, and there is where the harm lies.