Home » Classification and the periodic table

Classification and the periodic table

It might be thought that classification in the special and historical sciences is occasionally atheoretical, but that in the general sciences, physics and chemistry, it is derived from Theory. But in fact one of the most exemplary cases of empirical classification that led to Theory is in these sciences: the periodic table.

According to a study by Eric Scerri (2007), the standard textbook story of the periodic table is wrong, unsurprisingly since most such textbook narratives are. The idea of a table of elements did not derive from Dalton’s revival of atomism, but from increasingly refined laboratory techniques for ascertaining the atomic weight of elements. The notion of atoms, of course, did derive from Dalton but these developments did not seemingly rely much upon it. Because samples of element include what we now understand are isotopes, atomic weights are not perfectly correlated with atomic numbers. Consequently while it was apparent from the experimental data as the atomic weights of elements were refined that there was some sort of pattern, e.g., by Stanislao Cannizarro and Alfred Naquet who both arranged these weights in a table, early attempts tended instead to rely on a kind of platonist numerology, Johann Döbereiner’s “theory of triads” in which patterns of elemental properties fell into threefold relations. These were not unlike the affinities of systematics, and indeed the term “affinity” was used by chemists. However, there were too many exceptions for triads to be the basis for a table of elements (although something like it later returned briefly). 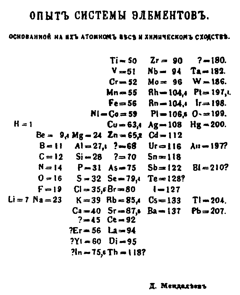 Until Dmitri Mendeleev’s table was published in 1869, the best previous version was that of Julius Lothar Meyer,[1] who, like Mendeleev had arranged elements in a series based on their atomic weights. What Mendeleev did that was better than Lothar Meyer and other precursors was to employ his vaster knowledge of the empirical properties of chemical elements, and to make an arrangement based on weights and properties, in a kind of family resemblance (Scerri 2007: 125, 150). He refined it over many years, again based on the experimental results. The term “experimental” here is a little bit misleading, in our terms, because while there was intervention to refine and purify the samples used, this was not intervention to experimentally modify the samples along some independent variable to test a hypothesis. In our terms, it was simple empirical research.[2]

Mendeleev even expressly noted that he was taking a Lockean or even operationalist approach:

. .  . by  investigating  and  describing  what  is visible  and  open  to  direct  observation  by  the organs of the senses, we may hope to arrive, first at hypotheses,  and afterwards at theories, of what has now to be taken as the basis of our investigations. (quoted in Kultgen 1958: 180)

Subsequent to the adoption of the table by chemists, there arose a program to improve and explain the “periodic law”. As Scerri says, once scientists have a classification, they seek an underlying cause of the regularities (as Darwin did).

Following on from the adoption of atomic theory and the discovery of electrons by Thompson in 1897, and the nuclear structure of the atom proposed by Rutherford, Bohr’s introduction of the quantum to the structure of the atom led to an explanation of valency, which was originally discovered by Edward Frankland and Friedrich Kerkule in the 1860s. Eventually, Rutherford and Antonius van den Broek proposed around 1911 that each atom had an integer number that gave it its weight. About the same time, the discovery of isotopes by Frederick Soddy explained why atomic weights varied: different samples had varying admixtures of the isotopes, whose weights varied.

In short, the periodic table is a mixed case of empirical research guiding theory development. It is not a simple example, because there was prior Theory, and also because much of atomic theory derived from other sources and cases, especially in the study of radioactivity, but nevertheless classification plays a key role in this most central of physical scientific domains.

1. Scerri gives notice of at least four later “precursors”, Emile Beguyer De Chancourtois, Gustavus Hinrichs, John Newlands and William Odling, who proposed some of the features later credited to Mendeleev.
2. Scerri 2012 has argued that Weisberg 2007 is wrong to think Mendeleev was producing, inadvertently or otherwise, a model. He proposes that classification is a kind of “sideways explanations”. This need not affect Weisberg’s view of the importance of models (since he allowed that Mendeleev was not actually making models, but gave a hypothetical interpretation in which he was), but it is indicative of the lack of philosophical attention generally given to what he calls mere classifications.

Scerri, Eric R. 2012. A critique of Weisberg’s view on the periodic table and some speculations on the nature of classifications. Foundations of Chemistry.