My research associate, Dr Malte Ebach, has brought to my attention an inadvertent proof of the truth of chocoholism.

The New England Journal of Medicine, a most prestigious and scientific journal, has published a paper by Franz H. Messerli, M.D, which shows a strong correlation between the annualised national consumption of chocolate and the number of Nobel laureates produced by that country. The money quote is this:

There was a close, significant linear correlation (r=0.791, P<0.0001) between chocolate consumption per capita and the number of Nobel laureates per 10 million persons in a total of 23 countries…

The figure shows this clearly: 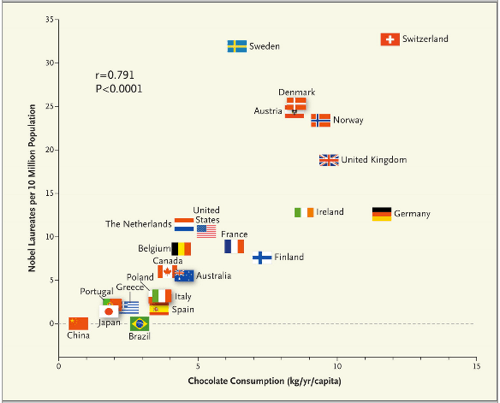 Sweden is an outlier because it is administered from Sweden, and so we might think there is a confounding variable there.

Clearly, causation is correlation, and I expect on this basis to be awarded several Nobel Prizes myself. I think that had the author controlled for quality and degree of chocolate to cocoa butter and other contaminants, the signal would be even stronger.

Science says it’s true, so it must be.