Home » A periodic table of insects? More thoughts on classification

A periodic table of insects? More thoughts on classification

Seen by Malte Ebach at the XXIV International Conference of Entomology in South Korea: 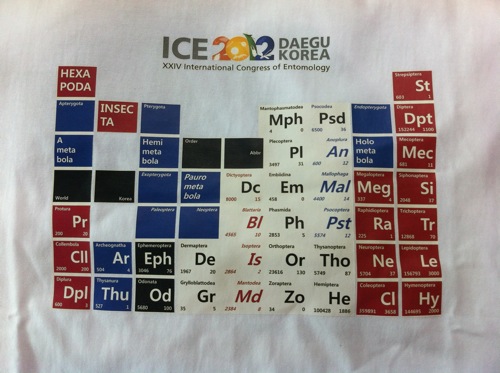 What’s fun about this (to a philosopher of taxonomy) is why a periodic table doesn’t serve to classify taxa in biology like this. Instead we get this: 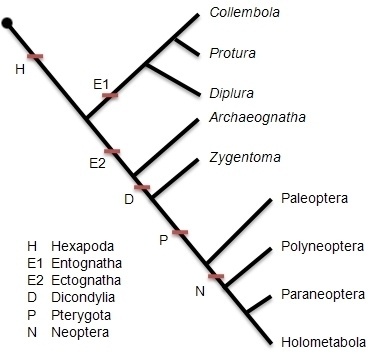 The answer is that elements are, and taxa aren’t, a series. That is, elements fill every available spot on a timeless sequence, whereas organisms (and other historical objects, like institutions, cultures, and planets) do not. So a periodic table works for elements. It doesn’t work for historical taxa. They fill the available space extremely sparsely (in fact the available taxonomic space is so large we couldn’t represent it – how many possible characters or traits could organisms have?), and do so in an irregular and contingent manner. So a tree diagram, representing the actual taxa and their relations, is formally the better way to classify them. Other ways to classify them graphically include Venn diagrams and indented lists, but they all end up doing the same formal job.

That formal job is to indicate that of any three arbitrarily chosen taxa, two are more closely related than either is to a third, a view that goes back at least to Aristotle (doesn’t everything?). The explanation of that relationship is historical: the two more closely related taxa share a more recent common ancestor than either does with the less closely related taxon. However, the classification logically precedes the explanation, in that it sets up the explanandum for the historical explanans. Once the classification (and explanation) are in play, we refine and extend it inductively to other taxa. This is called “phylogenetics”.

Classification is a crucial and almost inescapable function in science, not merely at the early stages of a discipline but throughout its lifespan. We neglect it at our peril. Unfortunately it has been so deprecated recently that even those who are doing classification have to pretend they are in the business of hypothesis generation and testing, when in fact they are setting up the things hypotheses are needed to account for.

The difference between classification by series and classification of sparsity, however, is even less well appreciated. Everyone is taught in biology, for example, that we abandoned the former (the great chain of being) in favour of Darwinian tree thinking, but few seem to appreciate what that means. We are so taken by adaptationist stories (which are, by nature, series-style classifications; adaptive landscapes represent some fictive space of possible states in which we are locating this or that trait-bearer) that we tend to forget how sparsely we have filled it (by “we”, I mean, organisms on earth, of course). Classifying in terms of adaptive traits is a very limited form of classification, entirely dependent upon what the investigator happens to think is critical or significant. Nature has no such cognitive limitations and arranges things as it wills, without regard for series or orderly behaviour. We either keep up, or we spend our time classifying our own mental contents.

All that from a joke poster…