Who put the holism into chocoholism? Why, I did. Here’s why:

As every First Philosopher has known since at least the fall of the Roman Empire, the universe is composed of four contrarieties. This is a fancy way of saying that there are four things that form opposites. This view is often ascribed to Hippocrates, or Aristotle or even Pythagoras. It is in fact a corrupt view of the Revealed Truth of Chocoholism.

Aristotle thought the world was composed of the contrarieties Hot-Cold, Wet-Dry, which were formed from the four elements Fire, Air, Earth and Water: 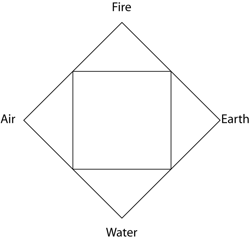 Air and Fire were Hot, Fire and Earth were Dry, Air and Water were Wet, and Water and Earth were Cold. Things made of substances of proportions of these elements had proportionally those properties. This became the theory of the Four Humours (a humour is a substance in the body): 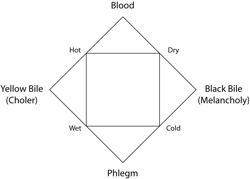 The four humours blood, choler, melancholy and phlegm were the “elements” of the living body. When they were in balance, the body was in health, but when it was too dry, or too cold, it suffered and the balance had to be restored; this is the foundation of Galenic medicine.

We may laugh at these simple theories today, but they echo a much deeper Darkity* – the underlying structure of the metaphysical. And it is not mere physical properties that we should be considering this way. Physics is physics; we are after the foundation of the physical, the moral, and the aesthetic. It is in Taste that we find true relief.

There are four Tastes that comprise the Universe, and each one has its virtue and its vice, its haecceity and its privation, its passion and its passivity. These Tastes are Salt, Sweet, Sour and Bitter. In their right proportions they constitute all the flavours of the world.

Now I am not suggesting that these are always literal flavours. They are metaphysical properties that underwrite all experiences. Literal sweetness is an instantiation of Sweet, but not everything that instantiates Sweet is sweetness. A mother’s love for her child is sweet, because it instantiates Sweet. When the capital letter is used we are dealing with something like Platonic Forms, except they are not unembodied, ever. They are the properties of the world, not Plato’s Heaven.

So we get this: 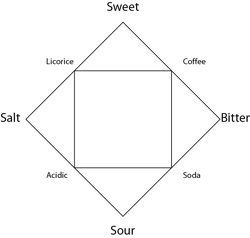 But where is the Chocolate, I hear myself ask? Well, since Chocolate (and its earthly instantiation, chocolate) is not reducible to the sum or proportion of any of these Flavours (or flavours; remember the capital letter is significant), and yet all physical things are composed of these elements, Chocolate is more than the sum of its flavours: 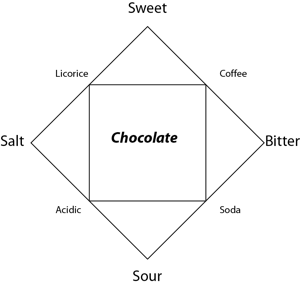 Everything that Chocolate touches becomes transcendent, more than the merely physical.

More revelations as they take me. It is mere coincidence that the time between revelations coincides with the free time I have available. The cosmos works that way.

* A Darkity is a deep and umbrifying notion that brings relief to the light of knowledge, so that we may see the deeper structure thereby. It in no way is a statement of confusion or a barrier to knowledge. I base this term on Daniel Dennett’s term “deepity”, which is a statement that when true, is trivially so, and when deep, is false. However a Darkity is always true (just never illuminating, which would defeat the whole purpose), and always very deep.

Published in Chocosophy, Humor and Metaphysics